How do you determine demand for water quality improvements when monetary resources are scarce?

Access to clean water for drinking, washing, and cooking is critically important to maintaining human health. Yet 30% of the world’s population lacks access to clean, safe drinking water, and diarrheal diseases kill nearly 1.4 million people across the globe annually. Of these, nearly 500,000 are children under five years of age. 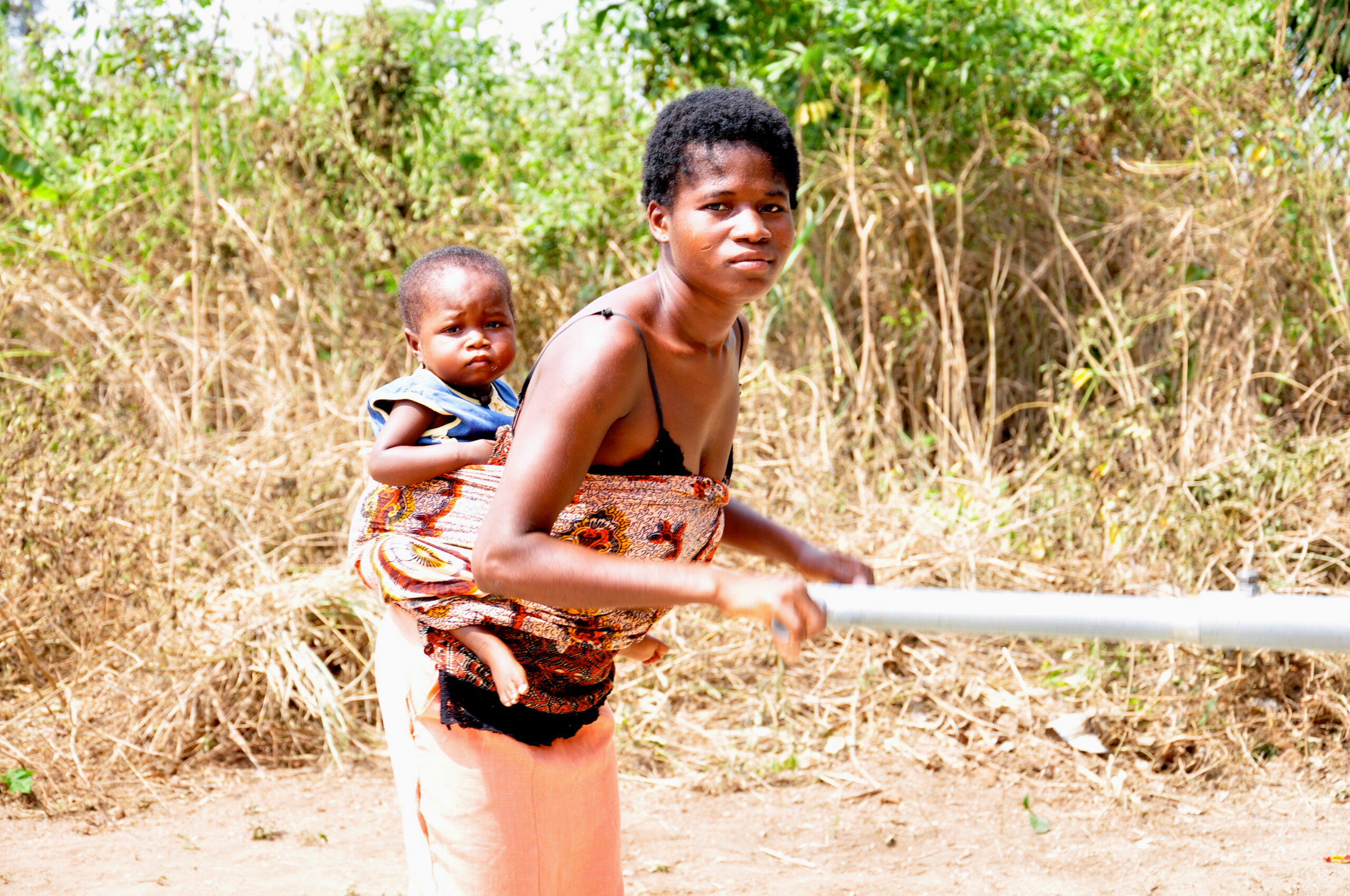 In sub-Saharan Africa, where access to clean water is especially problematic and diarrheal diseases are responsible for nearly 10% of deaths in children under five years old, infrastructure improvements are often poorly governed, and recontamination of water is possible as it is directed to homes. One possible solution to these problems is to install relatively inexpensive yet effective household water filters to remove disease-causing microbes. However, the use of these filters is not widespread, and demand for the technology is consequently low.

To shed light on why this paradox exists, economists need to be able to measure willingness-to-pay (WTP), a tool by which users — in this case, households — provide a price they would spend to purchase the technology. This information is useful for pricing policy and can guide how and how much to subsidize the technology for more widespread use.

In a study recently published in The Journal of Political Economy, CEnREP affiliate Raymond Guiteras and co-authors James Berry (University of Delaware) and Greg Fischer (London School of Economics) investigated willingness to pay for water filters in 1,265 households in rural northern Ghana. By selling these water filters to households, according to either a bid-style or take-it-or-leave-it pricing model, and following up with study participants after one month and one year, the researchers were able to assess demand for the filters as well as the human health impacts of filter purchase.

For the filter sale, the researchers employed either a simple take-it-or-leave-it (TIOLI) offer at a randomized price or an auction-like tool from experimental economics known as the Becker-DeGroot-Marschak (BDM) mechanism, named for the researchers who developed it. With the TIOLI pricing approach, the potential buyer draws a token numbered with a price of either 2, 4, or 6 GH¢ (Ghanaian cedi, with an exchange rate of approximately 1 GH¢ = $0.70 USD at the time of the study) from an opaque jar, and a potential buyer can choose to either pay that much or forfeit the purchase. 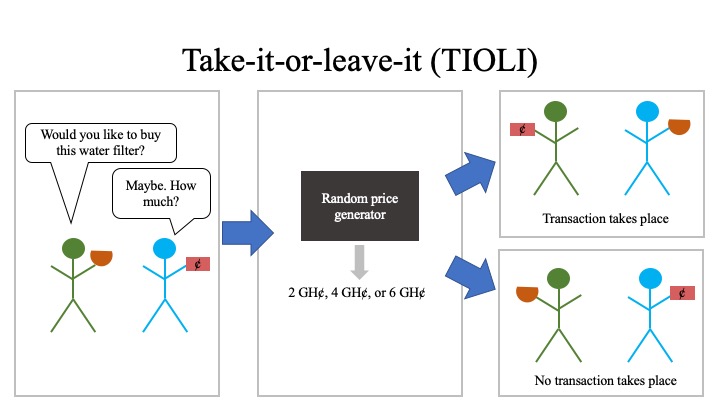 As shown in the figure below, for purchases priced according to the BDM mechanism, a potential buyer bids the maximum amount (x GH¢) they would be willing to pay for the item — in this case, the water filter. The potential buyer then draws a token with a random price (y GH¢) from an opaque jar. If the bid price is less than the price drawn, no purchase is made. If the bid price is greater than or equal to the drawn price, the buyer can purchase the filter at the lower, randomly-drawn price (y GH¢). In theory, the BDM mechanism has several advantages: it incentivizes the buyer to bid the maximum amount they would spend; provides a more precise estimate of WTP than the more traditional TIOLI approach; and, since the random price draw creates experimental variation in the allocation of the filter, BDM allows the researcher to estimate the relationship between WTP and the benefits of the filter. While BDM has been popular in laboratory economics for many years, there were very few tests of its performance in the field, and none in developing countries. 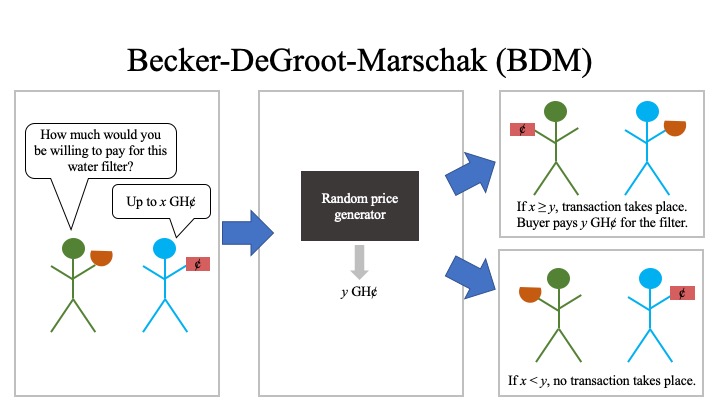 The results of the study provide significant insights: the median willingness to pay in the BDM cohort was 2.5 GH¢ (equivalent at the time of study to about $1.75 USD), approximately 10-15% of filter manufacturing costs. At the break-even cost of the filter (21 GH¢, approximately $15 USD), demand was nearly zero. At follow-up visits with study families one month later, the researchers found that the likelihood that a child in the household had diarrhea in the two weeks prior to the visit had decreased by about one-third, from 21% before filter sale to about 14% one month later. For families who purchased the filters using the BDM pricing model and had at least one child under the age of five, 90% of filters were in working order, and filtered water was available in 75% of the homes.

However, after one year, fewer than half of studied households still were using their filters, and the likelihood of a child in the study cohort experiencing diarrhea had actually increased overall. By comparing the household’s willingness to pay with filter usage and the incidence of diarrhea, a pattern emerged in the one-year follow-up data: Filter usage was highest among those households with WTP between 4-5 GH¢, with lower usage among those with lower WTP, and children in purchasing households with higher WTP were less likely to experience diarrhea. The overall increased incidence of diarrhea in the study cohort after one year was attributed to those households where willingness to pay had been below the median 2.5 GH¢, as those households were less likely to still be using the filter. Using the randomly generated price — a crucial aspect of the BDM mechanism — the researchers were able to show that the health benefit (i.e., decreased incidence of diarrhea) varied according to how much the buyer was willing to pay.

“Our paper shows that BDM performs reasonably well even in a very challenging setting,” said Guiteras. “We were especially excited to see that BDM could reveal important differences in the filters’ benefits across households. This would have been very difficult to detect using standard methods. However, we also saw that there are aspects of how households behave in BDM that need more investigation, and we need to understand better how to communicate to risk-averse households that their best strategy is to think carefully about their true maximum willingness to pay and to use that as their bid.”

Because higher willingness to pay was associated with larger benefits of the filter after one year, the authors posit that there is some support for the view that willingness to pay reflects welfare — although the overall willingness to pay is still low relative to filter manufacturing costs. The authors also conclude that proper filter use and maintenance are critical to achieve the filter’s potential health benefits.

To combat the problem of inconsistent use, the authors suggest investment in technologies that require less user effort. Additionally, more research into user behavior and how to elicit sustained filter use is needed in communities where such technologies are implemented.

The full paper can be found here.