Access to hygienic sanitation is something we take for granted in the U.S., but the number of people without it is stunning: 2.5 billion, or a third of the world’s population. This is estimated to cause 280,000 deaths per year, along with a high prevalence of chronic diseases.

The study found that offering microcredit increased a household’s willingness to purchase latrines in a region where only 31 percent of residents owned them to begin with. While a mere 25 percent of households wanted to buy an unsubsidized latrine kit when full payment was required on delivery, the number increased to 60 percent when financing was provided.

The downside? Almost two years later, only 30 to 40 percent of the households that had purchased a latrine had installed it, regardless of whether or not they had received a loan. 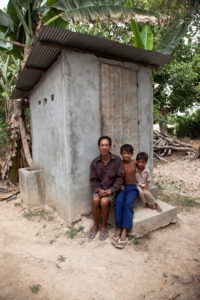 “I was definitely surprised at the low installation rates, given that people had paid a substantial amount of money for these kits,” Guiteras says. “The policy conclusion of our paper is that microcredit can be really valuable for getting people to the first step of purchasing this kind of good, but there is still a lot we don’t understand about the motivation to actually install and use it.”

The take-home message may appear slightly discouraging, but Guiteras views the study as a more nuanced defense of the microcredit model. It may not have helped small-scale businesses become more profitable to the extent initially hoped for, but he says, “let’s not give up on microcredit yet.”

Guiteras argues that their positive effect on purchases is a necessary first step for the ultimate goal of improving human health. “Our response to the first wave of critical evaluations is to say that a financial product can make people better off in a lot of different ways,” he explains.

More detailed studies of what it takes to go from investment to implementation are the logical next step. For example, Guiteras would like to evaluate whether a more comprehensive package—latrine kit, building materials for a surrounding shelter and financing for both—would improve installation and usage rates.

The project is a successful collaboration between universities and implementers, with an evaluation that took only 3.5 months from inception to results at a cost below $60,000.

“This kind of project is valuable and shows that partnering academic researchers with practitioners can work well in both directions,” Guiteras says.