More than half the world’s population – nearly four billion people – now live in urban areas.  As cities become more populated, they have also spread across the landscape in patterns that tend to be car-centric, low-density residential development commonly referred to as “urban sprawl.”

A new study by CEnREP Affiliate Faculty Zack Brown, and his co-authors Walid Oueslati and Jerome Silva, explores how the development patterns associated with urban sprawl impact the happiness of urban residents. 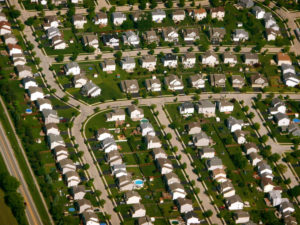 Although low-density residential neighborhoods can be attractive to home buyers seeking the amenities these neighborhoods provide, this low density development also comes at a cost.  For the individuals living outside the city core, traffic congestion can take its toll by creating ever longer commutes.  But the impacts of urban sprawl go well beyond these direct impacts and include increased noise and air pollution from traffic, loss of wildlife habitat and agricultural land, and alteration of watershed functioning in developed areas.

Given all the impacts of sprawl-style development, many cities and municipalities around the world have implemented a variety of policies to reduce urban sprawl and increase more densely populated areas.  The general goal of these policies, says Professor Brown, are to create more dense urban environments that mix commercial, residential and public open spaces in the same neighborhoods. 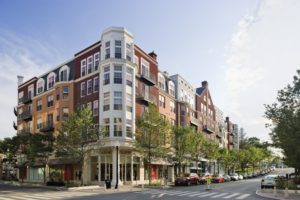 A natural question to ask, points out Brown, is whether or not these policies do in fact improve the well-being of people living in the mixed-use neighborhoods. To explore this question, Brown and his co-authors examined how various patterns of urban sprawl determine individual well-being in 33 metro areas across Western Europe and Japan.

The authors developed a unique data set that merged a household survey on environmental attitudes and behaviors with geospatial data on a number of indicators that describe the development patterns of the neighborhoods in which survey respondents live.

When looking at the overall structure of a city, the authors also find some evidence that people living in more compact cities aren’t any happier than people living in cities that are more sprawled.

Even though data for this study were from Europe and Asia, Brown notes a tale of caution for U.S. urban planners.  “Planners and policy makers need to find creative solutions that mitigate the broader negative impacts of sprawl, while still maintaining the features of neighborhoods that people value. In our study, people were happiest in residential neighborhoods, whether they are in the urban center or in the outer regions of the city.”