Pests and weeds do not respect property lines. In agriculture, this basic fact means that farmers’ pest control decisions can affect pest pressure on neighboring farms. One such pest control decision is the planting of crops like corn and cotton that are genetically engineered with traits that kill damaging insect pests, such as corn earworms, corn borers and rootworms. Widespread adoption of these crops across the US and globally has in a number of cases yielded drastic reductions – or even elimination – of target pests. In the US Midwest, for example, the widespread use of genetically engineered corn with an insecticide produced in nature by the bacteria Bacillus thuringiensis (Bt) effectively eliminated the European corn borer as an economically significant pest in that region.  Bt corn has been estimated to save corn growers in that region $6.8 billion cumulatively over a 14-year period in reduced corn borer damages. Most strikingly, the majority of those benefits over that period were estimated to go to growers who did not plant Bt corn.

Of course, the more effective and widely deployed a control measure is at reducing pests, the less of an incentive individual farmers have to use it. Why pay the often significant price premium for the most advanced genetically engineered seed, if your neighbors’ use of these products has already eliminated the pest in your area? Under these circumstances, some farmers would likely ‘free ride’ on other farmers’ costly pest control efforts. The degree to which such free riding occurs would depend on a number of factors, including how costly and effective the control measure was at reducing the overall pest population, how much the pest moved between farms, as well as the degree to which farmers in an area were willing to cooperate to reduce the overall pest population. 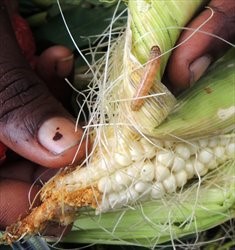 In recent research, NC State faculty Zack Brown and Rod Rejesus, with former doctoral student Lawson Connor (now faculty at Louisiana State University) and a colleague at the University of the Philippines, study this phenomenon. Over the last two decades, corn growers in the Philippines (as in other countries) have widely adopted genetically engineered corn containing both Bt and herbicide-tolerance traits. A major corn pest there is the Asian corn borer (a relative of the European corn borer). Bt corn is highly effective at controlling this pest, and has had significant economic benefits for Filipino farmers. However, the price premium for these seed traits was significant over the time period observed by the researchers: Corn seed prices with a Bt trait were between 41% to 65% higher than for conventional corn without any genetically engineered traits. In areas and years where Bt corn was found to be more prevalent, the researchers hypothesized, the lower should be the abundance of this pest, all else being equal, and thereby the less of incentive there would be for farmers pay the extra expense for Bt seed.

“We wanted to see whether individual farmers’ expectations about corn borer infestation and their willingness to pay for Bt corn appeared to decrease with greater area-wide use of this technology,” said Rod Rejesus, Professor of Agricultural and Resource Economics and Extension Specialist at NC State.

The researchers analyzed data from farmer surveys conducted by researchers at the University of Philippines in 2007 and again in 2011, with funding from the International Food Policy Research Institute. In their analysis, the researchers found that a ten-percentage point increase in Bt corn use in a given area appeared to cause an average 11% reduction in the fraction of farmers expecting Asian corn borer infestation in the upcoming growing season, and a 17% reduction in an average farmer’s willingness to pay for the Bt crop trait.

The research has implications for the potential benefits that farmers in a given area might gain by working together in the control of mobile pests. The research also suggests that the total value of pest control technologies depends not only on adopting farmers’ own benefits and willingness to pay for the technology, but also on the pest reduction benefits provided to their neighbors. While the study only analyzed the Philippines, the phenomenon is likely to occur widely, given entomological research that has shown Bt crops to produce largescale pest suppression in a variety of contexts. 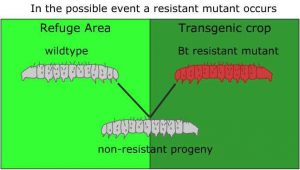 “While these results suggest that some farmers may be free riding on their neighbors’ use of Bt crops, this should not be taken to conclude that farmers are necessarily ‘underadopting’ Bt crops,” said Zack Brown, Associate Professor of Agricultural and Resource Economics and faculty member in the Genetic Engineering and Society Center at NC State. One reason for this is that widespread and continuous use of Bt crops is well known to select for pest populations that are resistant to these crops. In the US, the Environmental Protection Agency (EPA) regulates these crops. The EPA requires seed companies to compel growers to plant non-Bt ‘refuges’, in order to sustain pest populations which remain susceptible to Bt crops.

“In some sense, area-wide pest suppression and any free riding that occurs from that could provide some built-in incentive for growers to plant Bt refuge,” Brown noted. “Recognizing these kinds of ecological feedbacks in farmer demand for these crops could be used to improve the design and economic efficiency of Bt refuge policies.”

The research appears in the journal Ecological Economics as: