Reliable access to water in the arid American West is the lifeblood of agriculture, cities, and ecosystems. Climate change, population growth, and persistent drought drive both competition and collaboration over management of limited water resources.

Today, many Native American tribes play an under-recognized, but key role in the allocation of water as they legally define their water rights through negotiated settlements with neighboring water users. Settlements have insulated tribes from water shortages, given them a voice in regional water planning, and potentially served as a critical first step in restoring reservation economies and ecosystems.

However, many tribes have not yet completed these settlements, and to date little academic research has been conducted into the negotiation process. A paper recently published this week in Environmental Research Letters—led by PhD student Leslie Sanchez and co-authored by Bryan Leonard and CEnREP faculty affiliate Eric Edwards—fills this gap by creating the first comprehensive dataset on these settlements. 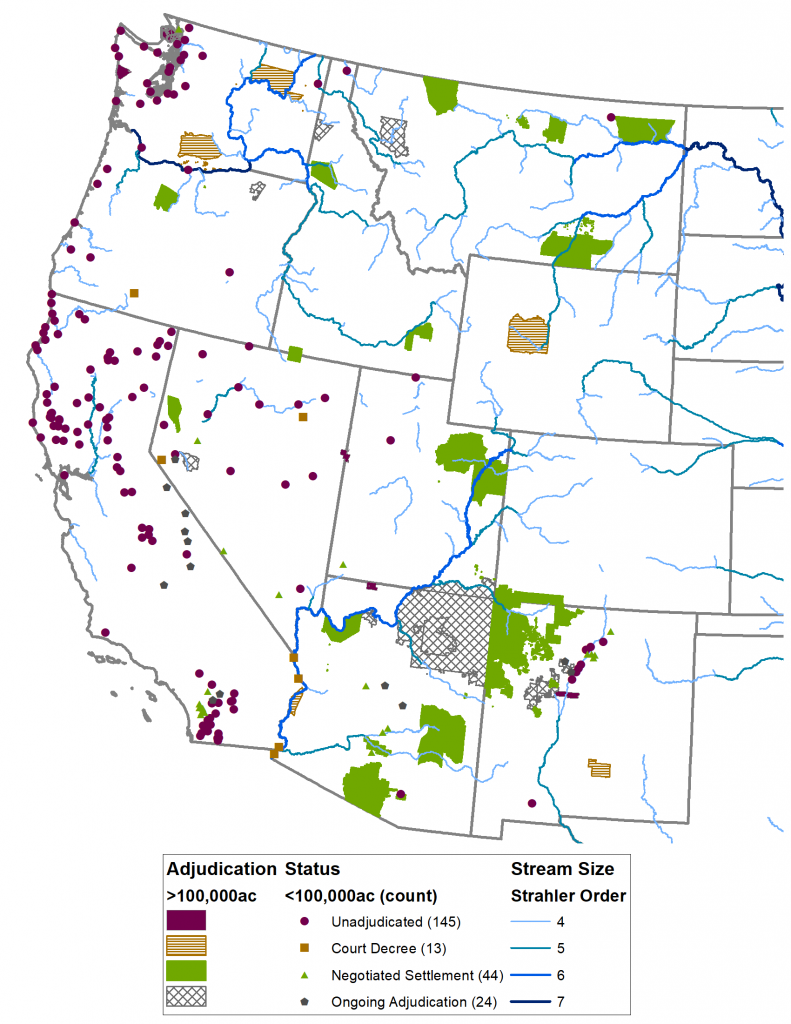 Historically, most of the water in the American West went to off-reservation irrigation for agricultural production. In the late-1800s as white settlers moved west and dammed and diverted rivers and streams to provide irrigation water, the indigenous people on newly created Indian Reservations were excluded. As a result, tribes have endured negative impacts of water scarcity on public health, economic growth, and reservation ecosystems.

A 1908 Supreme Court case (Winters v. United States) ruled that reservations in the western US hold high-priority water rights, but obtaining these rights requires undertaking a difficult legal quantification process. Known as adjudication, in the 112 years since the ruling, this process has settled water claims for 56 of 226 federally recognized reservations in the West.

Because so many tribes have not yet adjudicated, uncertainty looms large over water users across the West. Off-reservation, there is growing concern about how water users in already fully appropriated river systems will adapt to accommodate tribal water claims.

The adjudication process is long and costly, averaging 21 years until settlement is reached. Because of the delay and costs associated with the adjudication process, the researchers find that tribes wait to assert legal claims to water until scarcity becomes acute. The high cost and delay help explain why many tribes have not yet resolved their claims.

The difficulty, and delay, inherent in resolving tribal water claims lies in the need for off-reservation water users and the federal government to agree on settlement terms. The researchers find adjudication takes longer as the number of parties involved increases.

The paper also helps reduce the uncertainty over tribal water settlements. Reservations with the most arable farmland receive more water and federal funding for water infrastructure. But these reservations have already adjudicated. This means there is significantly less uncertainty over the amount of future tribal water claims than was previously thought. It also raises key questions about how tribes benefit from newly acquired water rights at a time when regional water use is shifting away from agriculture to urban and environmental needs.

As tribes’ share of water in the west grows, understanding the evolution of tribal water use will be key to collaborative and sustainable water management. The researchers are addressing these questions in a follow-up study that assesses changes to reservation water use after a settlement is completed.