Dr. Mary Evans, a postdoctoral fellow at CEnREP from 2001-03, was recently promoted to a full professor of economics at Claremont McKenna College in California, where she holds the Jerrine and Thomas Mitchell ’66 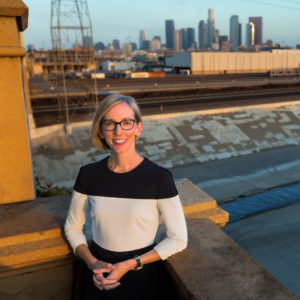 That paper, titled “The Clean Air Act Watch List: An Enforcement and Compliance Natural Experiment,” focused on how a now-defunct EPA watch list affected compliance with the Clean Air Act.

Few people knew about the confidential watch list until 2011, when NPR and The Center for Public Integrity reported their “Poisoned Places” segment, which Evans heard while driving to work. The story focused on communities situated near the worst violators of the Clean Air Act, and it revealed the existence of a list started in 2004 to track facilities that had major violations but had not resolved them within nine months.

Evans has continued using the list for research in a working paper titled “The Clean Air Act Watch List and Federal Oversight of State Monitoring and Enforcement Efforts.” Evans and her colleague look at how long it took state regulators to issue an enforcement action when the list existed versus when it was not in effect — and she finds that state regulators acted more quickly when the list was in effect.

“That might even be more important than the watch list’s impact on facilities. The facilities were being impacted because the state regulators were changing behaviors,” Evans said. “So if the watch list is gone and it was helping the EPA in an oversight role, that absence to me is problematic.”

Because the watch list influenced not just facilities, but also the state regulators ultimately responsible for ensuring compliance with federal regulations, there may be cause for concern about how the discontinuation of the list might affect federal oversight and response to violations.