What’s a fair price to pay for conserving tropical forests?

When you ask a family to change the way they make their living, simply telling them it’s for the global benefit of reducing carbon emissions is not enough; they ought to be financially compensated for that change in livelihood.

But what’s a fair price to pay them? That’s a question CEnREP affiliate Erin Sills, a professor of forestry and environmental resources at NC State University, set out to answer with her colleagues at the Center for International Forestry Research in Indonesia.

In a study published in World Development, the researchers estimated the opportunity costs of foregoing deforestation (and related activities), using surveys at 17 sites in six tropical countries. Those costs factor into a policy introduced in 2007 by the United Nations Framework Convention on Climate Change, known as Reducing Emissions from Deforestation and Degradation, or REDD+ (the “+” stands for sustainable forest management).

“We wanted to examine how opportunity costs vary across households since the basic idea of REDD+ is to encourage land users to voluntarily conserve forests,” Sills explains. “To induce that participation, we need to know their actual current income from activities that increase carbon emissions, which has not previously been studied at this level of detail.”

Land use changes account for about 10 percent of carbon emissions globally, but more than 50 percent in some of the six countries. While REDD+ has already been implemented through a range of forest conservation activities since 2007, Sills says direct cash payments to land users have only rarely been made.

With detailed information from 4,200 households in Brazil, Peru, Cameroon, Tanzania, Indonesia and Vietnam, the researchers estimated opportunity cost as the value of all forest-related household production at market prices minus the cost of all purchased inputs—essentially the net profit from access to land when household members use their own labor. Ideally, REDD+ would compensate each household for the actual cost of foregoing that income.

“We found that there is substantial variation in opportunity cost down to villages and households, which means global or even national average costs are inappropriate,” Sills says. “But since it is infeasible to determine the actual cost of each household at each site, we also show that a system of flat payments that is easier to implement could have important co-benefits.” 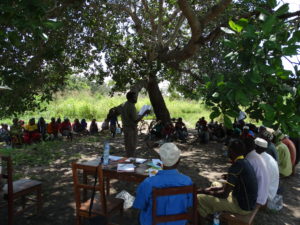 These co-benefits result from opportunity costs for poorer households typically being lower than for richer households, meaning that flat payments would overcompensate the poor. For Sills, this poverty-reducing feature of REDD+ is an important counter-argument to its critics who feel that asking land users to reduce deforestation to solve a global problem is unfair because they aren’t personally the cause of it.

From a global economic perspective, REDD+ makes sense if the social cost of climate change is higher than what the policy would have to pay the agents of deforestation on the ground to compensate for their opportunity costs. Many development economists agree that this social cost is on the order of $36 per ton of carbon dioxide, based on a 2015 study by an interagency working group of the U.S. government.  With that assumption, the researchers found that household compensations would make financial sense in 16 of the 17 sites.

“The caveat is that nobody is currently paying the full social cost of carbon emissions on voluntary markets,” Sills notes. “So although REDD+ makes sense from a public perspective, the private market doesn’t demonstrate the willingness to pay and we’re somewhat caught in that bind.”

On the other hand, the study showed that households would respond at a much lower price point at some sites than others, which could help prioritize the policy’s implementation: REDD+ should start at sites that have lower opportunity costs because of lower agricultural profitability, higher forest carbon content, or both.

At the end of the day, Sills thinks the right version of REDD+ could mitigate global climate change if it becomes part of a global treaty that makes governments accountable for reducing carbon emissions.

“Although people have become more skeptical of REDD+ over time, our study emphasizes that it’s not only a cost-effective way of addressing climate change, but also could generate co-benefits,” Sills says. “Since flat payments are the only practical thing that can be done anyway, it’s helpful to know that they would result in a larger transfer to poorer households and thus promote the well-being of rural areas in developing countries.”